It was Tuesday, 3/8/22, and I was starting my 3rd year fly fishing. My log says I dressed for a polar vortex, fishing an OPST three weight Micro Skagit trout Spey and a tin of flies I tied after reading Pat Dorsey’s Fly Fishing Tailwaters. I parked and walked twenty minutes downstream to an area usually held by earlier risers. No one was there. At some point corn snow started falling. I heard it sizzle as it hit the river and melted. Then catching went crazy. I ended up netting and releasing 8 browns in a jiffy. My fingers were cold and numb, but I replaced shredded flies and carried on. In the midst of the snow / catching / releasing frenzy I stole glances of something dark chocolate brown flashing through the deadfall across the river like a college gymnast on high bars. I saw it checking an animal’s den, sniffing around the entry just above the water.

Later I wondered what it was. It was bigger than a cat, with a fluffy body and tail. Dogs aren’t arboreal and don’t venture much above the trunk. It was neither beaver, muskrat, nor mink. It wasn’t a bobcat: they’re not dark chocolate brown and their tails are, ah, bobbed. I put it on the back burner and tied flies to replace the shredded ones. There’s something gratifying about replacing shredded flies.

Ten days later I did something I hadn’t done since I started fly fishing: I left my rod home and put my 5d3, a 70/200 lens with a 1.4 TC, and tripod in my adventure pack and returned to where the whirling dervish caught my eye. Someone was there. As I picked my way through the brush and turned upstream to a spot across from the deadfall, I nodded to the fellow casting a dry fly. He ignored me. I think he thought I was about to exhibit real bad etiquette. I sat down in a patch of 3’ tall dry grass and set up the tripod, camera, and lenses. The fisherman said, “Heh, what’s up?”

I told him I fished the area the week before in a snowstorm and saw a large fluffy dark chocolate brown animal hunting along the bank and then whirling through the deadfall. I couldn’t identify it then but now suspected a large member of the weasel family. I consulted Steven Buskirk’s Wild Mammals of Wyoming and Yellowstone National Park. It was smaller than a wolverine, and there are only a few hundred of them left in the lower 48 (see Douglas Chadwick’s The Wolverine Way), though one had recently made the news by killing 18 sheep one morning in one pasture in Randolf, UT. It’s also probably not a fisher: they’re a little smaller than a wolverine, more rare, and their range doesn’t include the Wasatch. I suspected a Pacific Marten. I told him the animal showed up around 4 or 5 and that I had a few hours before (and if) it came. 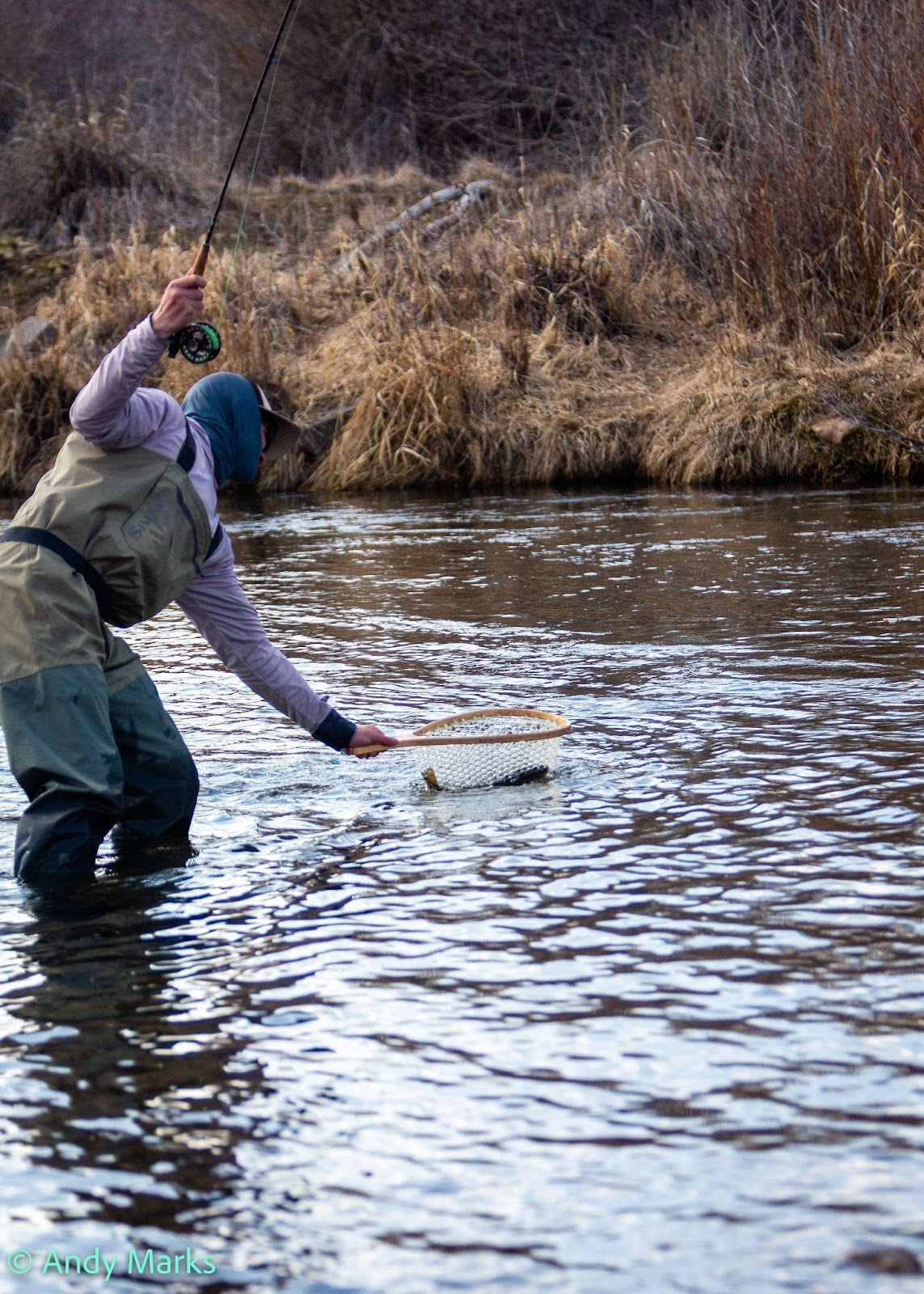 I watched Vinny of New York fish. He netted five browns while I waited for “a real tough weasel” as Jim Harrison quipped in Brown Dog. Vinny had his gear in a wet bag pack, didn’t waste time or motion, didn’t wade far from shore, wet his hands before touching a fish, and kept a low profile. He made fly changes on land, by his pack. When the fish stopped rising he put down his dry fly rod and picked up his nymphing rod. I took mental notes, and almost missed what I came for. The whistle of a huge, hoary marmot across the river made me look its way. The marten ran by.

The marten was all business. It sniffed the den’s entry in the bank and went in, popping up in the brush 10’ back. I told Vinny it showed up, and he replied, “You’re right, it’s dark and fluffy. What did you say it was?” “Pacific Marten.” I got several shots before it bounded away up river right. I was jacked, but found time to ask Vinny more questions before leaving. He told me what fly lines he was using (Cortland Classic 444 Peach and SL Mint), the length of rod (8’6”), and what color midge hackle he used. 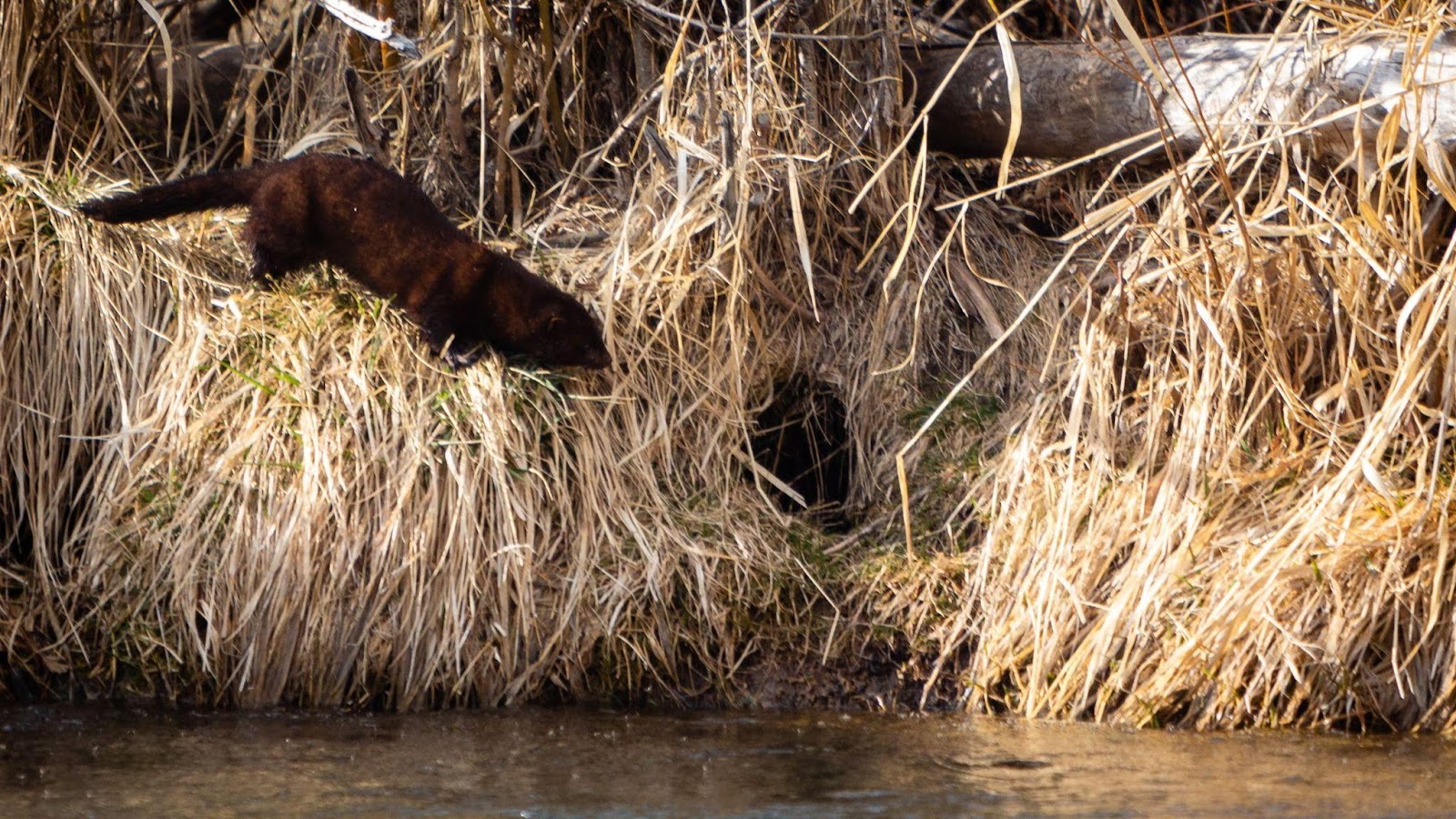 I emailed the Utah Wildlife Dept and included a few photos, asking, “Fisher or marten?” They told me that a fisher has a thicker tail near its base, and that it was most likely a marten. So cool. I wouldn’t have seen it if I hadn’t been fly fishing, and I wouldn’t have photos if I had been. Thanks for reading.

Andy Marks: I’m 65, I live in UT, fish in UT, in WY, Yellowstone, and ID. I’ve been fly fishing for 2 ½ years, I have 15 fly rods and 3 Tenkara rods and since I’ve used the latter I haven’t touched the former. LMK if this is close to what you want.

Some of our guest writers will be showcased on this profile. View all posts by AvidMax Guests

2 thoughts on “My Etiquette’s Fine”